Transport Malta MSIU issued an investigation report on the collision of the Maltese-flagged general cargo ship Klara with the Singapore registered general cargo/container ship Posidana and the Belgian tug Braakman in a Dutch Canal in April 2019.

Klara was enroute to Ghent, Belgium, laden with linseed.

A Dutch pilot was on board. Posidana was an outbound ship, assisted by two tugs Braakman and Union 5, navigating slightly on the starboard side of the Canal.

Klara adjusted her course to pass Posidana on the port side.

When Klara was close to the bank on its starboard, the pilot steadied the vessel parallel to the shoreline.

As the two ships approached each other, Klara took a sudden and an uncontrollable sheer to port side.

An immediate reaction on the helm, bow thruster and main engine speed had no effect.

In this unexpected situation, control of Klara was completely lost and a collision with the approaching Posidana and the tug Braakman was unavoidable.

Klara continued swinging to port and collided into Braakman and pushed it against the opposite bank.

Klara, now almost perpendicular to the Canal, was hit by Posidana on her starboard side.

The collision occurred at night and in moderate to good visibility.

Immediately after the collision, Klara sounded the general alarm. It became evident that cargo hold no. 2 had been breached and the vessel took a 5° list, although it remained afloat.

A berth was immediately made available and Klara, manoeuvred by the master, moored at Heros Terminal, Sluiskil.

-All vessels under the management were informed of the collision and the company’s internal investigation report was forwarded to all the crew members;

-The following changes were made in the company’s Safety Management System:

-Special attention was drawn to precautions during sailing in shallow and congested waters;

-Training of masters and navigational officers to be carried out regularly for the operation of vessels in inland waterways, its bottom and bank suction / cushion effect, and checked by SQ Manager during regular visits onboard; and

-Assessment of risks before entering shallow waters shall be carried out and risks re-assessed while sailing through these waters. 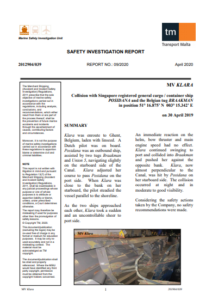