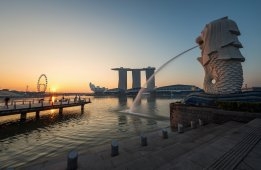 Hin Leong is the owner of one of Singapore’s largest bunker suppliers. File Image / Pixabay

Accountancy firm PricewaterhouseCoopers (PwC) has eight weeks to file a preliminary report on oil trading company Hin Leong after being granted interim judicial management of it by a Singapore court on Monday, according to local media.

Goh Thien Phong and Chan Kheng Tek of PwC have been appointed as interim judicial managers, the Singapore-based Business Times reported Monday after a hearing at the country’s High Court.

The hearing had initially been scheduled to be held on Thursday, but was brought forward to Monday at the request of some of Hin Leong’s lenders, the newspaper said.

Hin Leong’s banks have reportedly declined to issue the oil trading firm with new letters of credit, leaving the company and its subsidiaries in an uncertain position while its creditors attempt to reclaim their money through Singapore’s courts.

Hin Leong is the owner of one of Singapore’s largest marine fuel suppliers, Ocean Bunkering.

Hin Leong has yet to make an official comment on its situation, and company representatives have not been available for comment.