NTSB issued an investigation report on the contact of the towing Vessel Edna T. Gattle and its tow with Union Pacific Railway Bridge, on Atchafalaya River, in April 2019. The investigation found that the captain allowed the tow to proceed beyond a safe decision point without confirming the status of the bridge opening, in high current conditions.

On 24 April 2019, about 2348, the towing vessel Edna T. Gattle was pushing the barge Terral 2 downbound on the Atchafalaya River through the Union Pacific Railway Bridge at mile 41.5, near Krotz Springs, Louisiana, when the captain lost control of the tow and the vessel and barge made contact with the bridge and piers.

There were no injuries or pollution, as a result.

The National Transportation Safety Board determines that the probable cause of the Edna T. Gattle and tow’s contact with the Union Pacific Railway Bridge was the captain allowing the tow to proceed beyond a safe decision point without confirming the status of the bridge opening, given the high river current.

Regulations governing bridges over navigable waters state that bridges must open promptly and fully for the passage of vessels. However, bridges can fail to open for a variety of reasons, including train traffic or mechanical issues.

When the captain initially found the bridge unopen, he began backing to avoid hitting the closed bridge. The captain stated that he felt in control of the vessel until he started backing up.

He did stop in time to avoid hitting the closed bridge, as discussed in Terral’s procedures.

However, despite backing and attempting a second approach, the captain was unable to line up the vessel correctly to transit the bridge.

With a strong current pushing the vessel to starboard, the captain was unable to recover and make a better final approach.

Though the bridge was slower to open than average, the captain and company should have anticipated such contingencies and planned mitigating actions, especially given the higher than normal river current.

Since the company did not include decision points in their operations procedures for the Union Pacific Railway Bridge transit, the captain did not have a set location to stop and reassess the approach to the bridge, once he realized that the bridge would not be open in time for his transit as initially planned.

Had the captain slowed or stopped earlier at a planned and specified decision point before the bridge, he would have had more time and distance to make his second approach correctly.

Decision points in passage plans describe places or times when vessels must take action to avoid hazardous conditions. Such decision points should allow enough time and distance to safely execute a contingency plan. Passages that include lift and swing bridges must anticipate and account for delayed openings, especially in high-current scenarios. 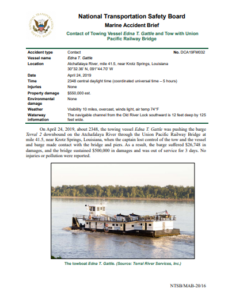