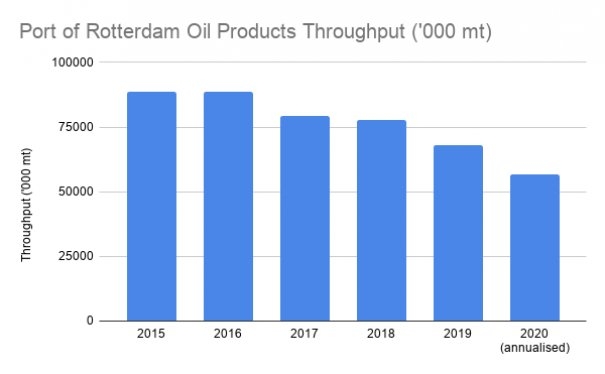 One of the less remarked-upon casualties of IMO 2020 so far has been the near-total collapse in the fuel oil cargo trade around Northwest Europe.

The high sulfur fuel oil trade flow from Russia to Western Europe, and then on from the Amsterdam-Rotterdam-Amsterdam hub over to Singapore, used to be one of the mainstays of the bunker market.

VLCCs discharging crude oil at the Northwest European refining hub would then in some cases take on 270,000 mt fuel oil cargoes for delivery to Singapore, the world’s largest bunkering port.

In the past around one or two fuel oil VLCC cargoes typically left Rotterdam every month, but with the advent of IMO 2020 none have been seen since at least October, according to the Port of Rotterdam.

In first-quarter throughput figures the port reported a substantial decline in its liquid bulk figures, with refined oil products throughput dropping by 32.8% on the year.

“Oil products goes down especially because of fuel oil,” Ronald Backers, business intelligence manager for liquid bulk at the Port of Rotterdam, wrote on his LinkedIn account last week.

It was the second quarter in a row without any VLCCs being loaded with fuel oil.

“It was the second quarter in a row without any VLCCs being loaded with fuel oil.”

The oil products figure has been in decline for at least the past five years. Annualising the first-quarter figures to cover 2020 as a whole, the annual products throughput has declined by 8.31% on average since 2015.

“There was a sharp fall in the trading of fuel oil between Russia and Singapore, for which Rotterdam has been the main throughput location in recent years,” the Port of Rotterdam said in its first-quarter statement last week.

“Instead, much of the fuel oil went directly from Russia to the United States for refining.”

No Help From VLSFO

One might expect trade in very low sulfur fuel oil (VLSFO) cargoes to make up for the decline in HSFO, but this has yet to show up in the figures.

At the moment the Port of Rotterdam’s data does not discriminate between HSFO and VLSFO cargoes, Ronald Backers told Ship & Bunker last week.

But Rotterdam’s VLSFO prices have consistently been the cheapest of the major hubs this year, and the set of upgraded, complex refineries around Northwest Europe should allow for enough VLSFO production to export to the rest of the world.

Delivered VLSFO prices at Rotterdam have been at a discount of between $33/mt and $150.50/mt to Singapore’s levels so far this year, according to Ship & Bunker pricing, implying that there should be arbitrage opportunities to take VLSFO to the East at least some of the time.

But while the COVID-19 pandemic is disrupting shipping and leaving an uncertain outlook for bunker demand, this trade seems unlikely to pick up.