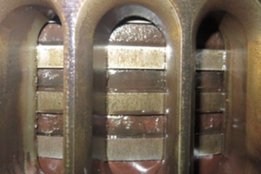 Viswa Lab has so far received and tested over 20,000 number of VLSFO fuels. These fuels are from multiple sources, multiple blending procedures, and multiple global bunkering ports.

Out of tested VLSFOs, there are cases of abnormal cylinder liner wear in 12 cases. This paper presents Viswa’s findings based on an in-depth pattern recognition study of these 11 fuels and their effect on the engines. The data studied has been provided by the fuel users who have experienced the excess liner wear problems when using VLSFO fuels.

We have not identified any clear pattern in the parametric values of these VLSFO fuels which caused excessive liner wear. Therefore, we started to investigate other factors and focused on the cylinder lube oil (CLO), its properties, its base number, feed rate, and other details. We identified that:

While all the fuels conformed to the upper limit of sulfur at 0.5 wt.%, we came across some fuels where the sulfur content was as low as 0.28 %. The interesting observation was that in all the 11 cases the CLOs fell within the pattern values listed above.

As an example, an engine using 1% sulfur fuel will require less dosage and a lower BN. At a dosage of 0.6 g/kWh would, therefore, be over additivated. A fuel with a sulfur content as low as 0.5% could call for a combination of a low cylinder oil dosage and a low-BN oil (BN40 or even lower). 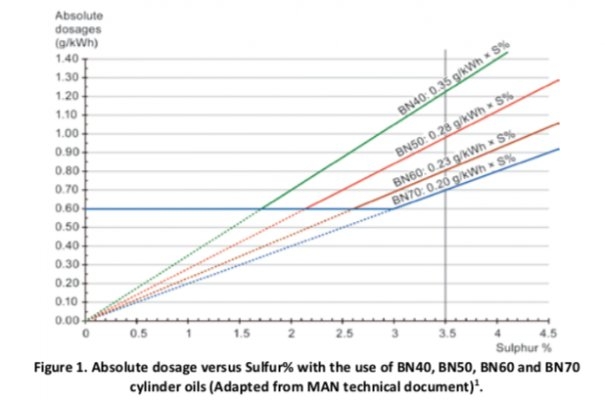 Based on the observations and limitation listed by MAN it is possible to explain the actual mechanical phenomenon which caused excessive liner wear. We hypothesize that the mechanism of damage happens in two stages.

Based on the observations and limitation listed by MAN it is possible to explain the actual mechanical phenomenon which caused excessive liner wear. Please see the sketch below (Figure 2): 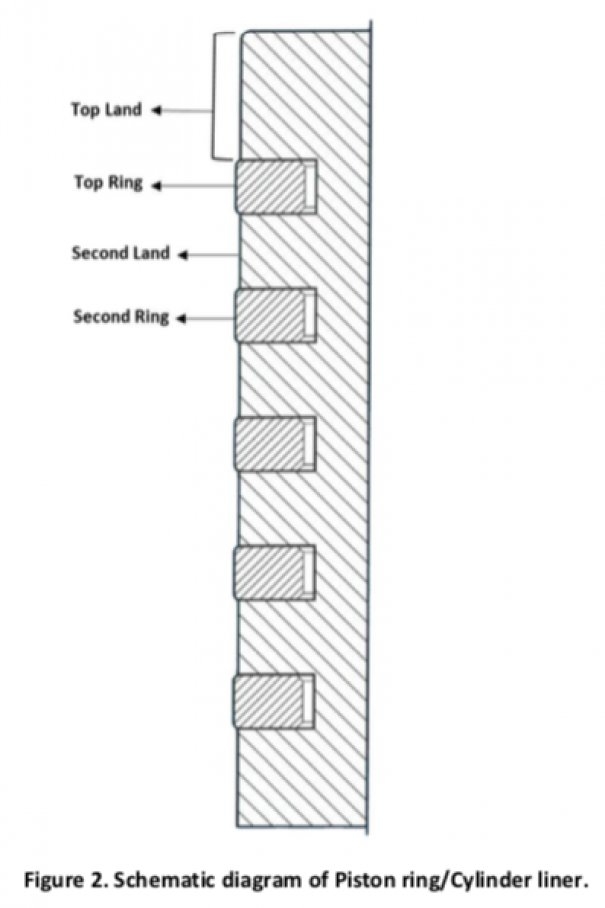 Another important factor to consider is the required min acidity in the combustion chamber, this acidity is needed to generate small corrosion pits on the surface of the cylinder liner, perhaps around 50-micron diameter and 10- 15 microns deep. These pits act as reservoirs to retain the cylinder lube oil which allows for lubrication. If there is very low acidity in the VLSFO fuel, these pits will not form on the liner surface. The very thin lubrication film along with the absence of pits will cause a direct rubbing action between the piston and liner and the liner will have a smooth shiny surface, which is a prime condition for scuffing. So, we predict that the scenario looks like this: A low sulfur content in the fuel does not have enough acidity to generate corrosion pits which will act as a reservoir for CLO. Whatever acidity was in the fuel has been more than neutralized by;

Both 1 and 2 create an alkaline condition which is a prime precondition for scuffing. The high-top landing on the piston crown assists this process by exposing a large surface area with a very thin lubrication film. We were able to see in the 11 cases reported that the crown carries wear marks which could be caused by scuffing between cylinder liners and piston crown.

It is important to understand the phenomenon of scuffing which is caused because of the heat of friction during the rubbing and due to very little availability of the lubricant on the surface of the piston. The material of the piston and cylinder liner fuse together which is similar to welding. However, with the movement of the piston, the weld is broken and in the next stroke, again another weld is formed. This is the process of scuffing. By nature, since scuffing eats into the body of liner material the damage to the liner (liner wear) will be excessive.

This results in the piston ring wearing out rapidly and when over 40 % of the piston ring width is worn out, the ring does not have the strength to withstand the shear stress and it breaks.

Data from some similar cases: These are new vessels and as the scuffing started, the vessel operator noticed that the iron content in CLO drain increasing. This iron content rose significantly from 500 to 1000 to 1500 to 2000 ppm. This happened so fast that the ship staff reacted by increasing the feed rate from 0.6 to 2.5 g/kWh. In fact, they flooded the area with CLO hoping to see the reduction in iron content in CLO drain happen. This did reduce further scuffing to some extent. When the iron content in CLO drain went down the ship staff reduced the feed rate to slightly above normal values. However, the root cause of this problem, the progression from 1 to 2 have all been identified now with our study. We are happy to present this to you; we do recognize that there may be a few variations in the scenario we have presented. However, the base root cause is what we feel we have identified in this report.

Example: Table 1 shows the feed rate and BN of CLO for marine gas oil (MGO) used on other ships that did not face any liner wear or scuffing issue and the iron content in the CLO drain sample was low for all these three cases. 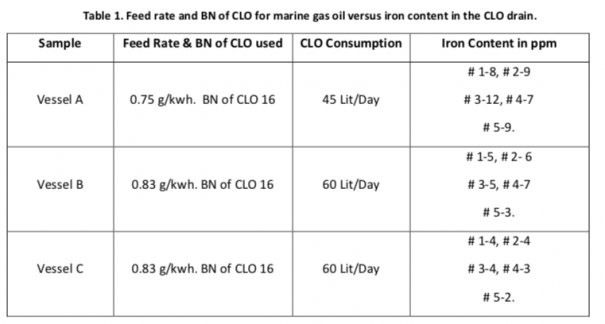 Below you can find the summary of some of the cases with high liner wear and excessive scuffing problem. 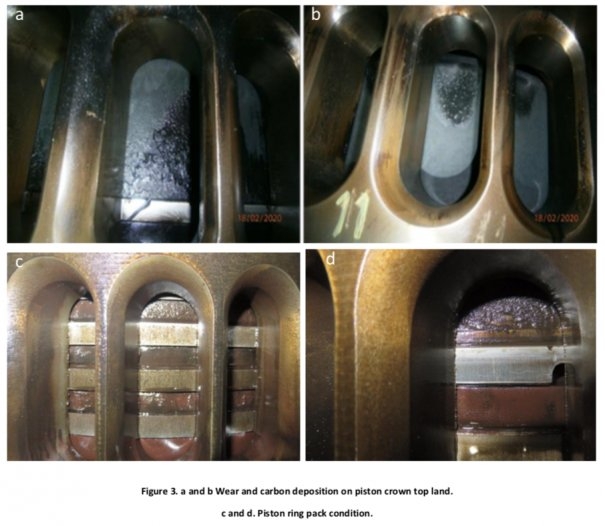 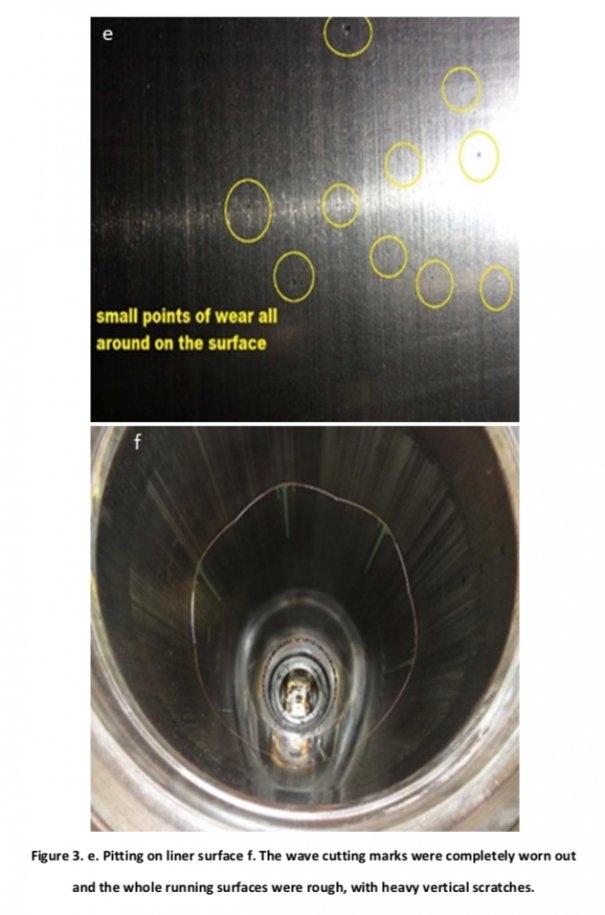 Analysis of the problem

Based on the tested results, we do not see anything significantly wrong with the fuel samples’ properties. The only issue was using CLO with BN higher than 40 with the feed rate greater than 0.6 g/kWh.

Viswa Lab has received a report of piston ring breakage and liner wear (Fuel sample was VLSFO “RMG 380-0.5% grade”). We received a damaged piston ring for testing. Below is the photograph of the surface of the ring in contact with the liner. 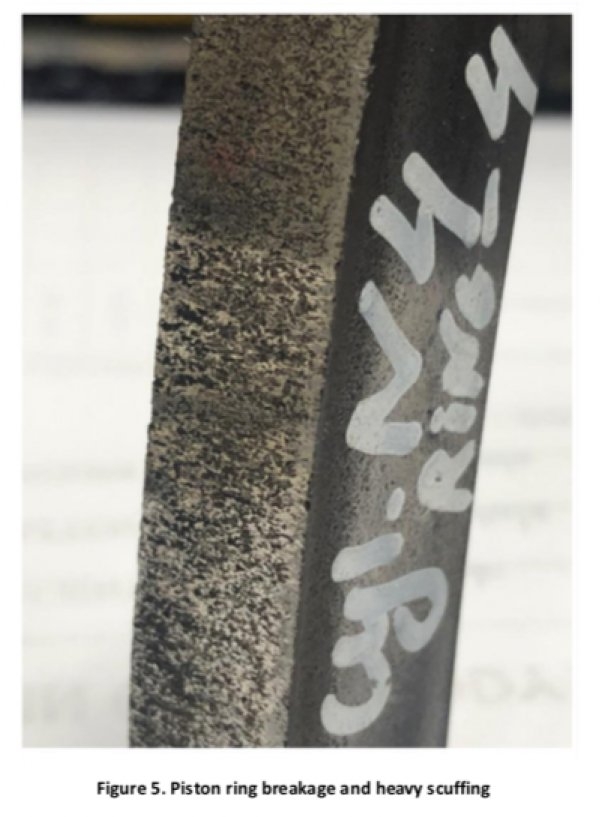 Analysis of the problem

Traditionally high sulfur fuel (HFO) required cylinder lube oil with a base number of 70 to neutralize the sulfuric acid produced during the fuel combustion. While cylinder lubrication consumption should be carefully monitored by switching to very low sulfur fuel oil (0.5% sulfur). Choosing a cylinder lube oil with an optimum feed rate and the base number is critical. Since CLO with high base number and feed rate high will lead to excessive scuffing, wear of piston rings. The first stage of damage will happen when the BN of the CLO is excessive with a high feed rate. In this case, small corrosion pits will not form because of the excess of alkalinity, the CLO film thickness becomes thinner, the friction between two surfaces increase which causes liner wear and scuffing. The second stage of damage is caused by insufficient CLO detergency characteristics. CLO does not have enough detergency to wash all the scuffed liner material carried by the piston ring.