The shipping industry is now ten weeks into IMO2020 and the experiences of many vessels has certainly been as varied as the fuel types available to them. Therefore, this seems an appropriate time to look back at what VPS have witnessed in terms of fuel quality in the early days of the new legislation.

VPS issue Bunker Alerts to clients whenever a short‐term fuel quality issue arises in a specific port for a specific fuel parameter. So far VPS have issued 15 Bunker Alerts in 2020, compared with only 3 Bunker Alerts over the same period of time in 2019.

Three of the VLSFO Bunker Alerts were related to sediment issues in Rotterdam, Piraeus and Singapore, whilst the fourth alert was for sodium in Port Louis.

Surprisingly HSFOs have produced the highest number of Bunker Alerts so far this year, with two alerts relating to Density, two for Flash Point, one for Potassium and the final alert relating to Sediment.

Three HSFO Bunker alerts were for Singapore (Density, Flash Point & Sediment), two were for New Orleans (Density & Potassium) and the final alert was in Lagos for Flash Point. 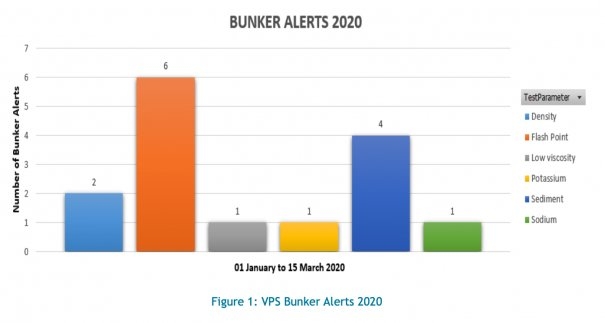 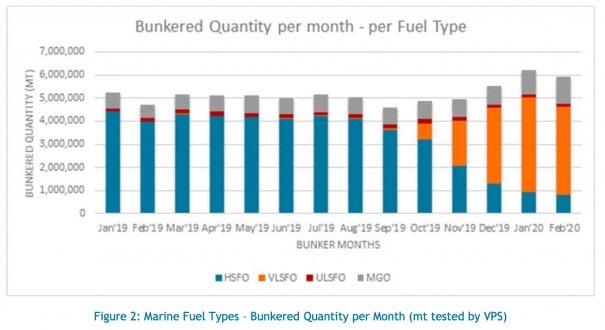 Figure 2 shows the development of VLSFO supply in contrast with other marine fuel types over time, as indicated by the bunkered quantity tested by VPS. VPS have observed VLSFO becoming the primary contributor to global marine fuel supply. HSFO has become marginalized to usage in the EGCS (scrubber) segment. Interestingly, we also observe an increase in the share of low sulphur MGO/distillate fuels over the first two months of 2020.

MGO supply in January 2020 increased by 34% compared to December 2019. At over 1 million MT of MGO bunkered and tested by VPS, this was a new peak in MGO supply that had not been witnessed since the introduction of the ECA zones in 2015. They fuel demand split for January and February in terms of bunkered volumes, from samples tested by VPS were as follows:

It will be interesting to see if this growth spurt in MGO continues, as this will most likely have an impact on regional pricing for this specific fuel type.

There certainly seems to be a sufficient level of supply of VLSFO and MGO in place to satisfy the market’s appetite. Whether the quality of VLSFO supply also meets the market and regulatory requirements, is another topic altogether. VPS has already observed several quality and compliance issues associated with VLSFO usage, such as problems with cold‐flow properties, stability, cat fines and sulphur content.

Now as the widest used marine fuel type, 4.1% of all tested VLSFO samples in Jan‐Feb 2020 were reported as being off‐spec for one or more test parameters by VPS labs. The most common parameters for VLSFO off‐specs are stability (TSP>0.10%), cold‐flow properties (PP>30°C), viscosity (depending on grade ordered), water content (H2O>0.50%) and cat fines content (Al+Si>60 mg/kg). Figure 3 provides a break‐down of global VLSFO off‐specs by parameter, as tested by VPS. The majority of off‐specs are due to Total Sediment Potential, (TSP) and Pour Point, (PP), which matches the trend of increasing sludge and wax‐related issues reported by VPS customers in the last months. It is crucial to test VLSFOs for Wax Appearance Temperature (WAT) so that the actual cloud point of these opaque fuels is known, as well as TSP/TSA/TSE, so that operational risks can be mitigated through effective handling, storage and treatment of the fuels onboard of the vessels. 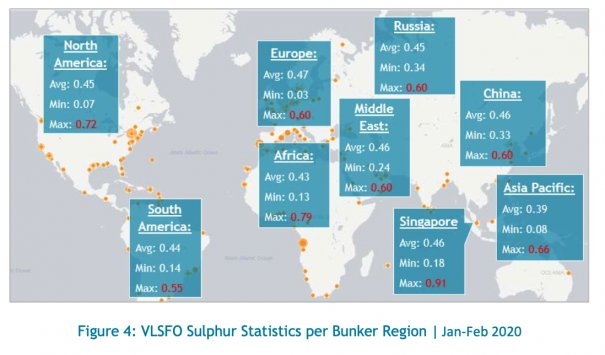 VPS continue to monitor the quality of marine fuels across the globe, issuing Bunker Alerts whenever a short‐term quality issue arises for specific parameters in specific ports, irrespective of fuel type or grade. This information is greatly valued by VPS clients in protecting their assets and ensuring legislative compliance with IMO2020 and SOLAS.

In addition VPS are assisting with the industries growing understanding of the new VLSFOs in terms of availability, port and supplier performance, quality, handling, storage and use, through our testing and advisory services, further supported by the monthly “VLSFO Insights” report, which can be obtained via subscription upon request.

In close collaboration with the industry, we introduced the first commercial bunker fuel testing and bunker quantity surveys for ships in 1981 and 1987, respectively. Today, customers remain at the heart of our business as we continue to expand our business.

We are committed to providing services with absolute integrity, professionalism and the highest quality standards.