Transport Malta’s MSIU issued an investigation report on a serious injury of a crew member while lashing containers on the deck of the general cargo ship MV Boston Trader, in the port of Oran, Algeria, on 14 March 2019.

MV Boston Trader was moored at Dar Es Salem Terminal, in the port of Oran, Algeria.

During the morning of 14 March 2019, the third officer received a call over the portable radio that one able seafarer had an accident while securing containers on the cross deck between Bay 06 and Bay 12.

On reaching the location, the third officer found the able seafarer standing with the sock and safety shoe of his right foot taken off and bleeding from the toe.

He immediately informed the master and the chief officer, and helped the injured seafarer down to the deck.

A few minutes later, a medical team arrived on board and took the injured seafarer to a hospital.

The lower end of a long lashing bar had fallen onto the seafarer’s right foot, cutting through his safety footwear.

One toe on the seafarer’s right foot was severely injured and had to be amputated.

Following investigation, the MSIU drew up the following conclusions:

During the course of the safety investigation, the Company reviewed and revised the securing of containers’ risk assessment form. Through this revision, the Company: 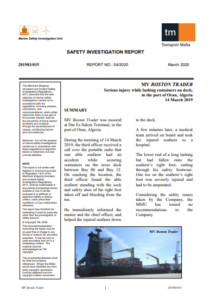