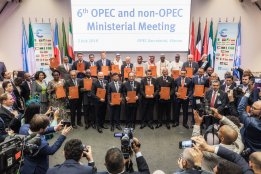 The combination of the COVID-19 virus outbreak cutting off demand with the collapse of the OPEC+ coalition ramping up supply is a deeply unhelpful phenomenon for the bunker industry at the start of IMO 2020.

Monday’s forecast by the IEA that oil demand will drop this year for the first time since 2009 came after the biggest intraday drop in crude futures since 1991 overnight as a spectacular falling-out between Saudi Arabia and Russia brought the future of the OPEC+ coalition into question.

That drop from Friday to Monday’s low is equivalent to an overnight fall of about $90/mt in VLSFO prices.

The upshot for bunker suppliers is that the fuel in their tanks is no longer worth what they thought it was.

The upshot for bunker suppliers is that the fuel in their tanks is no longer worth what they thought it was.

Global average very low sulfur fuel oil (VLSFO) prices stood at about $652/mt in January — at a premium of about 36% to the average front-month Brent price — according to the Ship & Bunker G20 index of prices at 20 leading bunker ports.

That average dropped to about $534/mt last month, at a 28% premium to Brent, and declined further to $457/mt for the first six days of March — before Monday’s slump.

The largest bunker suppliers at the more active hubs should largely be well-placed to cope with this rapid decline, as they trade often enough for their cargo purchases to keep up with delivered bunker prices, and in some cases they will have hedging positions protecting them.

But consider the position of the smaller supplier at a less active port — suppliers which represent a large percentage of global bunker sales.

For one of these suppliers that bought a small 10,000 mt VLSFO replenishment cargo in January at somewhere close to that month’s average price, they may have found buyers the next month demanding prices as much as $118/mt lower than what they paid for it.

That would amount to a loss of as much as $1.18 million on the whole cargo.

And, buying another cargo at February’s average price, they’ll have found buyers in March seeking prices as much as $77/mt below their buying price, or rather more after Monday’s drop — meaning a loss on their cargo of $770,000 or more.

As for a supplier that diligently prepared for IMO 2020 by picking up three months’ worth of VLSFO supplies before the start of the year at December’s high prices, in this case the loss may add up to several million dollars; the supplier that prepared least may have fared the best in this market.

Losses on this scale are not sustainable for a small supplier without very deep pockets or financial protection from hedging positions.

Losses on this scale are not sustainable for a small supplier without very deep pockets or financial protection from hedging positions.

Mitigating the losses slightly may be a cushion of cash left over from strong margins at the end of last year; as World Fuel Services‘ results showed last month, the IMO 2020 transition proved highly lucrative for some suppliers.

These strong margins will partly have reflected a high logistics premium during the transition, and could be expected to narrow somewhat now that transition period has passed; the G20 VLSFO premium to Brent has narrowed from a peak of $177.50/mt on Janaury 7 to $87/mt by the end of February, according to Ship & Bunker pricing.

In some ports the recent premium for delivered bunker prices over cargo and barge prices has been surprisingly wide, adding further cushioning against the price drops this year.

But these are advantages felt by the largest suppliers at the bigger hubs; it remains unclear to what extent their smaller competitors in more obscure locations have been able to enjoy the same benefits.

Conventionally you’d expect the rapid drop in bunker prices to stimulate new demand from shipowners, but with supply chains still in disarray because of the virus outbreak, this recovery may take a lot longer than it would under normal conditions.

If the recent price declines continue, smaller suppliers may find themselves as easy pickings for the wave of consolidation that’s expected to pass over the bunker industry this year.