We visited Canterbury as part of our last South England journey with a visit to the Cathedral in which we notice the ships bell of the HMS Canterbury. 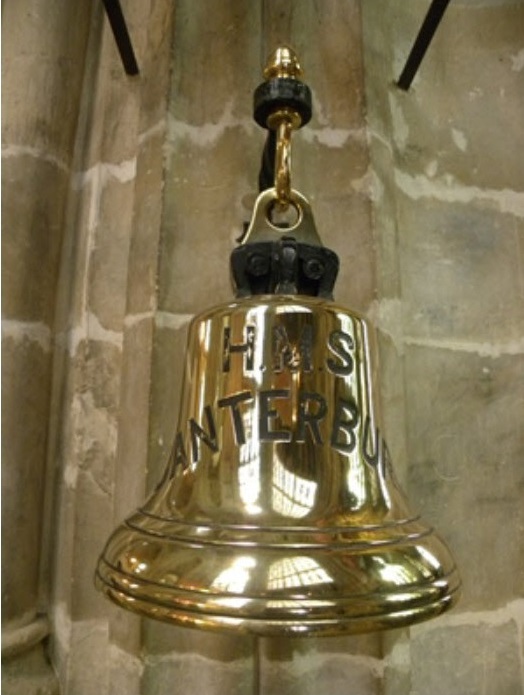 HMS Canterbury was a C-class light cruiser of the Royal Navy that saw service in the First World War and the Russian Civil War. She was part of the Cambrian group of the C class.

HMS Canterbury was laid down on October 28, 1914, launched on December 21, 1915 and completed in May 1916. Unlike the rest of the Cambrian subclass, HMS Canterbury was armed with six torpedo tubes instead of the usual four. 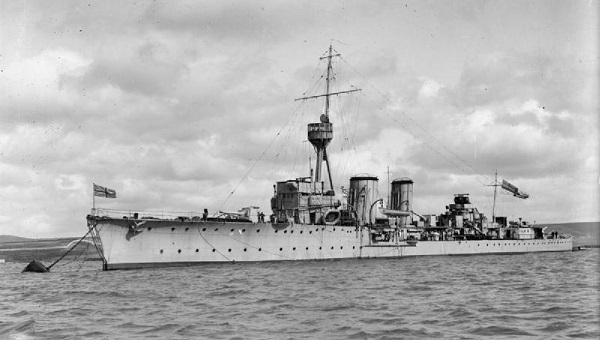 Commissioned into the Royal Navy in April or May (sources differ) 1916, HMS Canterbury was attached to the 3rd Battle Squadron in the Grand Fleet, commanded by Captain Percy M. R. Royds, and participated in the Battle of Jutland on May 31 – June 1, 1916. From 1916 to 1918, she was assigned to the 5th Light Cruiser Squadron, operating as part of Harwich Force in the North Sea to defend the eastern approaches to the Strait of Dover and English Channel.

On June 5, 1917, she and the light cruisers HMS Centaur and HMS Conquest sank the German torpedo boat S 20 in the North Sea near the Schouwen Bank off Zeebrugge, Belgium. On St George’s day, April 23, 1918, she was present at the great naval raid on Zeebrugge and Ostend. Later in 1918, she was assigned to operate in the Aegean Sea, where she served out the rest of the war.

After the First World War, HMS Canterbury served in the Black Sea in 1919 during the British intervention in the Russian Civil War. She commissioned at Portsmouth in November 1919 for service in the 1st Light Cruiser Squadron in the Atlantic Fleet. She was attached to the Gunnery School at Portsmouth from 1920 to 1922, then in the Portsmouth Reserve from 1922 to 1924. She was then recommissioned again at Portsmouth in May 1924 to serve in the 2nd Cruiser Squadron in the Atlantic Fleet, before beginning another refit in June 1925.

HMS Canterbury was sold on July 27, 1934 to Metal Industries of Rosyth, Scotland for scrapping.

HMS Canterbury‘s ship’s bell is preserved at Canterbury Cathedral in Canterbury, England, and her ship’s badge is on display at the National Maritime Museum in Greenwich, England.

The opinions expressed herein are the author’s and not necessarily those of The Maritime Executive.