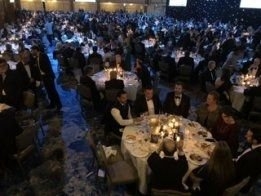 IBIA’s annual dinner remains one of the key fixtures of the week for the bunker industry. Image Credit: Ship & Bunker

The IP Week events at the start of IMO 2020 were supposed to take on a celebratory tone for the bunker industry.

We were going to get triumphalist statements about the start of IMO 2020 passing without major disruption, extravagant parties nodding to unusually strong bunker margins at the end of last year, and a general tone of optimism about what lies ahead.

It didn’t quite work out that way.

We saw some of that confidence about the worst of IMO 2020 being over — IBIA launched the week in style with a Titanic-themed video at its annual dinner declaring the iceberg had been successfully avoided — but the overall tone in bars and hotels around London was one of uncertainty.

The stockpiling effect is also giving the start of this year a phoney war feeling for another reason: the long-awaited VLSFO compatibility problems are being postponed.

The World Fuel Services results released late last week pointed towards one widely-shared view — that bunker margins had been extraordinarily strong for the many marine fuel sellers around the end of the year — but it was also generally acknowledged that these levels can’t last.

These abnormally wide premiums partly reflected very low sulfur fuel oil (VLSFO) price spikes in the fourth quarter; price increases that were expected to some extent, but exacerbated by shipowners building stocks of the product at the end of the year to avoid supply shortages early in 2020.

But because those buying levels reflected stockpiling rather than increased consumption, the premiums are likely to be sliding rapidly at the moment because of less call for more product early in the year.

The logistics component of the delivered bunker price also played a major part in the volatility for both VLSFO and HSFO at the end of the year.

Particularly as physical suppliers took assets offline to prepare to handle IMO 2020-grade fuels, the resulting pressure on congestion and supply led to particularly wide spreads for price indications of both fuels.

Other bunker market participants last week were less positive than the current strong premiums suggest, with one expecting “a very difficult year.”

The stockpiling effect is also giving the start of this year a phoney war feeling for another reason: the long-awaited VLSFO compatibility problems are being postponed.

Several bunker industry figures had expected to see a rash of compatibility problems appearing early in the new year as shipping companies inadvertently brought incompatible fuels into contact with each other, leading to engine trouble.

The feared uptick in complex and lengthy claims and legal disputes has apparently also not reared its head yet.

Current prices can’t last forever; at some stage soon the bunker industry will need far more working capital than it has been used to operating on for the past few years, and it is unclear how the industry will cope if the bankers prove unaccommodating.

But the fact that the quality question has not yet become pressing cannot quite be taken as an indication that it won’t.

As shipowners in many cases are still working through the stocks of VLSFO they bought at the end of last year, a large number of them have not yet bunkered a second type of 0.50% sulfur fuel.

That will change over the course of this month, and it won’t be until the spring that we get a better picture of whether compatibility problems and engine failures have been largely avoided.

This feeling of waiting for the other shoe to drop also applies to bunker credit.

As Ship & Bunker noted last week, you can now buy VLSFO at Rotterdam for less money than you were paying for HSFO there this time last year.

The drop in crude prices and VLSFO crack spreads that brought this about is overshadowing the credit problems that IMO 2020 was predicted to cause, in a similar way to how the 2014 crude collapse eclipsed the effect of the ECA sulfur limit dropping to 0.1% in 2015.

But current prices can’t last forever; at some stage soon the bunker industry will need far more working capital than it has been used to operating on for the past few years, and it is unclear how the industry will cope if the bankers prove unaccommodating.

Smaller suppliers are already feeling the pinch, according to talk from some market participants last week, with the larger buyers and suppliers less willing to do direct business with them.

The COVID-19 virus outbreak is at the root of most of the current market doldrums, as well as being the cause of a more muted tone to IP week this year as several parties were cancelled.

Organisers of some of the larger events that still went ahead estimated turnout was down by around 20% on last year as some market participants stayed away for fear of spreading the virus further.

Inevitably, one of the most frequent topics of conversation of the week was the merger of KPI Bridge Oil with OceanConnect, after weeks of speculation that parent company Bunker Holding would buy it.

The sale of OceanConnect was widely expected in one form or another, with rumours of the company being offered to several large bunker firms, and one theme of conversation was whether its arrival would herald the start of a wave of M&A activity throughout the industry this year.

The market disruption involved with IMO 2020 make that a distinct possibility, but this activity may not begin in earnest until the market settles more and the true impact is more widely known.

Finally, while decarbonisation was at the front and centre of most agendas for the forums and conferences held in IP Week, it was notable that alternative fuels did not spontaneously come up in many conversations in the various parties around town.

LNG and biofuels are starting to be of interest from parts of the industry, but neither are yet household names in bunker market discussions.

The bunker industry is aware that the alternative fuels are taking a growing slice of the market, and that the environmental regulations pushing them have the potential to be far more disruptive than the ones governing sulfur emissions, but as yet there is little appetite to bring them within the businesses of the conventional bunker sellers.

And with the industry and wider society still completely uncertain over which fuel is likely to become dominant as shipping addresses the IMO 2050 target, now may well not be the right time to be spending much time investigating the alternatives.

As with several other factors affecting the industry, this one will be on the back burner until we all have a better picture of what happened on January 1.