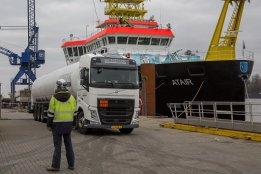 Hamburg-based LNG supplier Nauticor and ship manuafacturer Fassmer have started their cooperation in encouraging the use of LNG as a marine fuel with the first bunkering of a new gas-fuelled research vessel.

By cooperating the two companies “hope to generate synergy effects for the commissioning of newbuild or retrofitted vessels, which have been equipped with LNG engines and the respective system components,” they said in a statement Friday.

As the first project in their cooperation the German Federal Maritime and Hydrographic Agency‘s new research vessel the Altair, built by Fassmer, was supplied with its first LNG bunkers by Nauticor on 6 February.

The ship is due to enter service later this year.