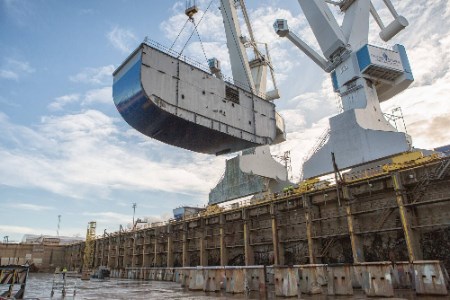 A traditional ceremony was held to celebrate the keel laying of Rauma Marine Constructions’ newbuilding, NB6002 for Wasaline, at the Rauma shipyard in Finland.

The vessel, which will be named Aurora Botnia, will be delivered to the operator, Wasaline, in Spring 2021. The new ferry will operate between Vaasa in Finland and Umeå in Sweden. The construction of the vessel will have a substantial effect on employment, totalling around 800 person-years.

The first keel-block of the new vessel was recently laid into Rauma shipyard’s dry dock. The block weights approximately 210 t. Laying down the keel is an important milestone in shipbuilding, and it’s often considered as the birth of the ship. Traditionally, lucky coins are placed under the keel. This time, the lucky coins were Swedish crowns and Finnish euros.

The new car and passenger ferry was ordered by Kvarken Link, a company owned by the city of Vaasa and the municipality of Umeå (Umeå Kommunföretag AB). The ferry will accommodate 800 passengers and will have a freight capacity of 1500 lane metres for cargo. The ferry will replace the Wasa Express, which now operates between Vaasa and Umeå.

The construction of the ship started in September 2019, and the next milestone will be its launching in the autumn this year. The completed vessel will be delivered to its owner in Spring 2021, with the shipbuilding project being worth around €120 million in total.

The new ferry will be the first ever RoPax ferry with a Clean Design class notation. The vessel will have a hybrid power generation system, as well as an electric propulsion system rarely used in car and passenger ferries. The ferry can be considered as the most environmentally friendly large RoPax ferry under construction at the moment.

The four main engines, supplied by Wärtsilä, will run on both LNG and LBG. Thanks to this technology, emissions in the Kvarken region of the Gulf of Bothnia will decrease compared to the emissions from the vessel currently operating there. The ferry can make use of biogas from a plant in Vaasa, which produces gas from recycled materials. When the ferry is approaching the harbour or departing she can operate utilising electrical power from a rather large battery pack.

“RMC wants to be a forerunner in producing holistic solutions with cutting-edge technology. The Clean Design class notation is one example of this. Moreover, we have partnered with Aalto University and agreed on joint research and development efforts,” says Jyrki Heinimaa, President and CEO of Rauma Marine Constructions.

“I’m very proud that we have reached this milestone. Laying the keel is an event that we have been looking forward to for some time. Now, we can see years of planning become a reality. This vessel is the most environmentally friendly large RoPax ferry in the world, its degree of domestic origin is more than 80%, and it employs the most cutting-edge, environmentally friendly technology,” says Peter Ståhlberg, Managing Director of Wasaline.

“Being involved in this unique project has been an extraordinary experience. Our ferry is a showcase for the whole shipbuilding cluster across the world and a prime example of what can be achieved through collaboration,” Ståhlberg says.

Read the article online at: https://www.lngindustry.com/liquid-natural-gas/13022020/rauma-lays-keel-for-new-wasaline-lng-ferry/